When you book with an account, you will be able to track your payment status, track the confirmation and you can also rate the tour after you finished the tour.
Sign Up

Or Continue As Guest

When you book with an account, you will be able to track your payment status, track the confirmation and you can also rate the tour after you finished the tour.
Sign Up
438

Why Book With Us?

Do not hesitate to send us an email. We are an expert team and are delighted to answer any questions you may have.

Subscribe for the latest news and workshop additions. Can't wait to hear from you!
11 Days
Availability : Oct 1 - 11, 2019
Kolkata, India

During the annual Durga Puja Festival honoring the Hindu goddess Durga,Kolkata is transformed into a gala street festival. Ornate 8 armed clay figurines are displayed in open air communal locations. Photographing Hindu priests reciting prayers. locals bringing anjali’s (offerings), dancers and musicians all electrify India’s third largest city. On this intensive photographic tour we will immerse ourselves in the City of Joy photographing the heritage neighborhood populated with decaying mansions, the blue painted walls in the 350 year old bazaar neighborhoods and feast on East Bengal cuisine. We will be lodged for 6 days in a centrally located Kolkata hotel which affords us the opportunity to wander and capture images of rickshaw pullers, yellow Ambassador taxis and the magic of the Durga Puja festival. This gritty city has wonderful architecture dating from its past as the home of the East India trading company and British rule, a flower market that rivals none in India and Durga Puja is a time when Kolkata is at its friendliest to travelers/photographers.

Varansi, the oldest living city in the world is the place to capture images of the Dushera and Bharat Milip Hindu festivates. Dushera represents good over evil.

Each year on Dussehra, colorful effigies of demon king Ravan are burned to mark the defeat of Ravan by Lord Rama. Leading down to the ghats a massive statue of Raven is carried through the center of town with Varanasi city dwellers and pilgrims singing hymns and chanting. Once at the Ganges it is lit afire and firecrackers will shriek in the air. Women will fill clay pots, (diyas) with oil and send them adrift.

The following day is Bharat Milip and Varansi comes squanch again. The people of Varanasi celebrate Bharat Milap with great fanfare and devotion. Thousands gather in the streets to see the procession of Lord Ram and his reunion with younger brother, Bharat. People pay their respect by putting tilak on forehead and garlanding Lord Ram and his brothers. Another interesting part of the Bharat Milap celebration is the presence of Kashi Naresh (former king of Varanasi) with all his royal paraphernalia and regal finery. Special devotional prayers are said at the numerous iconic Hindu temples in Varanasi.

This photography tour is geared towards those that have previously been to India and love its vibrancy and wish to document India festivals in their most authentic form. It is not suitable for those wishing to make their first foray to this visually compelling and sometimes overwhelming nation of 1.3 billion people. Of special note, festivities in India mean that you will be in the thick of it, crowds can be very large and a sense of spontaneity and independence is required. The Durga Puja festivities take place right after monsoon season and the weather will be hot and humid. On his photo rich trip you you can document a two Hindu holiday’s and produce a coherent photo essay. ​​ 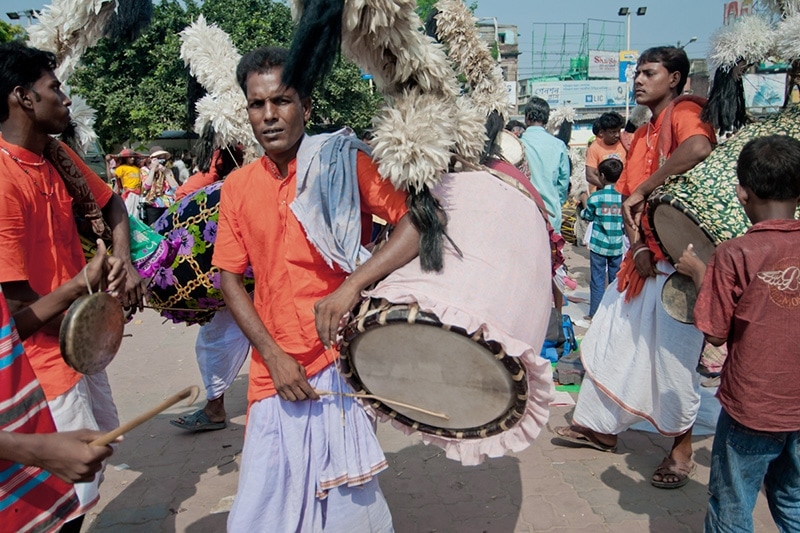 Upon arrival in Kolkata you will be greeted at the airport and driven to our centrally located hotel. Check in time is at 2:00 pm. The afternoon is free and the group will meet in the hotel lobby for a trip orientation and then dinner. (D)

After breakfast we will start our photo tour by taking a tram ride around the city. Kolkata still has a street car line that transverses the city from which we can shoot the wide boulevards, yellow Ambassador taxi’s, colonial architecture as well as the crumbling buildings that make up this mosaic which is called the “City of Joy”. The group will then photograph the vibrant Baghbazar and Sorabazar neighborhoods where the walls are painted blue, laundry is hanging from windows, people are praying in small Hindu temples where incense wafts from the windows.

Late afternoon we will be driven the 4kms to Kumortuli in north Kolkata. It is here where we will find the potters who fashion clay from the river beds besides their homes. This traditional potters villages will be a bed of activity as they sculpt and prepare the massive images of gods and godesses that will be displayed during the Durga Puja celebration. The 400 potters work their craft and many are 4th generation artisans. (B,L,D)

Early morning we will go to the Malik Ghat flower market which is adjacent to the Hoogli River. Near the southeast end of Howrah Bridge we will shoot the wholesellers as they arrive with huge consignments of flowers that are then auctioned to retailers. Many workers live in makeshift shacks, bathing in the river. At around 7am, local wrestlers practice their art on a small caged area of sand set slightly back from the river. Hopefully they will be there the day we shoot. Returning to the hotel for breakfast the group will be free until we go out in the later in the day.

Returning once again to Kumortuli we will photograph the potters as they finish constructing their effigies and transporting them to the various homes in the city. This neighborhood is a maze of narrow streets. Countless clay effigies of deities and demons immersed in the Hooghly during Kolkata’s colourful pujas (offering or prayers) are created in specialist kumar (sculptor) workshops in this enthralling district, notably along Banamali Sarkar St, the lane running west from Rabindra Sarani. These pandals will be pulled by large groups of men down the street of Kolkata and displayed for viewing and we will capture the processional. (B,L,D)

Immersing ourselves in Kolkata todays photographic activities will include documenting the last remaining rickshaw pullers in India, and the crumbling glories of this 350 year old city. These once glorious mansions have slipped into decay as the families could no longer take care of them. We will find a maze of beautiful and derelict 18th- and 19th-century mansions, built by former rajas and merchants, with blackened, weather-stained walls; intricate brickwork in Muslim, Hindu, and neoclassical styles; and colonnaded courtyards strangled by vines and other greenery. The most impressive of these is the Marble Palace, These relics will soon be gone as Kolkata modernizes.

Late afternoon we will walk the colonial heritage trail of Kolkata and shoot the Writers Building, Victoria Memorial, Belvedere Estate and Kolkata High Court. In the evening we will visit Pandals, or temporary temples where these multi hued colorful clay effigies are placed and people come to worship for the evening Aarti ceremony. (B,L,D)

Kolkata will be further explored and we will shoot the Muslim Quarter, the iconic Howrah railway station, the Jewish synagogue built in1854 as well as communal neighborhoods. This being Durga Puja the city will be infused with processionals and public displays of the clay deities. We will Pandal hop and capture images of this vibrant and friendly city. Sunset photo shoot from the Howrah Bridge. (B,L,D)

This being our last day in Kolkata we will have the opportunity to further explore this city of 15 million. We will take a short boat ride up the Hoogly River as well as visit Mother Teresa’s Mission and Mother House, or simply Mother House, where Mother Teresa’s large tomb is located. Once again joining in the festivties and shooting the gala of Durga Puja
during the afternoon and evening. The pandals are found throughout the city and sponsored by local community associations who welcome photographers in to their courtyards and homes (B,L,D)

After an early breakfast the group will drive to Kolkata airport and catch the 1 1/2 flight to Varanasi. The drive to our centrally located Varanasi hotel will get us there around lunch time. The group will be free until late afternoon when we start our photographic exploration of the oldest living city in the world. We will walk the ghats on the holy river Ganges and experience the Aarti ceremony. (B,L,D)

In the early morning we will take a boat ride on the ganges which is Varanasi’s principle attraction. This spectacular 4km sweep of the ghat is best seen at dawn when the devotees come to pay homage to the sun god. Also passing the burning ghat where cremations are conducted is a unique sight for this those who have a desire for a spiritual experience. As so well said in the Lonely Planet guide; Varanasi is the India of your imagination. One of the most colorful and fascinating places on earth, surprises abound around every corner.

In the afternoon we will venture out to photograph and experience the Dusshera celebration. It is a procession of deities that are carried to the ghats and set out to float. People will be parading in the streets and for most part the celebrations revolve around Ramlila shows. These performances take place all over the city and reenact scenes from Ramayana. At the end of nine nights, the performances culminate on the evening of Dussehra or Dasara, a larger-than-life effigy of Ravana is burnt to celebrate the victory of Rama over the king of Lanka. This ritual is called Ravan Dahan or the killing of Ravana. (B,L,D)

Today we will photograph the pageantry surrounding Bharat Milip. All of Varanasi gathers in the streets to see the procession of Lord Ram and his reunion with younger brother, Bharat. People pay their respect by putting tilak on their forehead and garlanding Lord Ram and his brothers. Another interesting part of the Bharat Milap celebration is the presence of Kashi Naresh (former king of Varanasi) with all his royal paraphernalia and regal finery​ (B,L,D)

Today we will spend the day wandering the streets of Varanasi and immersing ourselves in the culture. Photographing hidden temples, alleyways, narrow lanes, rickshaw pullers, flower sellers, small iconic sweet shops, sadhu’s and whatever comes our way will keep us in a photographic state of mind. This being our last day of the trip we will have a gala farewell dinner. (B,L,D)

After a leisurely breakfast we will be driven to the airport and catch our flight to New Delhi. Upon arrival in Delhi day rooms will be provided thus ending this photographic experience. (B)

The month of October is characterized by gradually falling daily high temperatures, with daily highs decreasing by 3°F, from 90°F to 87°F over the course of the month, and rarely exceeding 93°F or dropping below 84°F.